A CRIME that was to be kept top secret by the highest authorities appeared to have leaked just about now.

It seemed the ready ears of reporters had caught up with the little wisp of information in the air.

Like the pelting of large raindrops on desert grounds, thuds of a dozen footsteps sprinting through the large reception hall of the Planetario Hotels filled the ears of bystanders.

A serious case had just occurred there in one of the most luxurious hotel in the desert country of Quitalia located in the northeastern horn of Africa.

Like the diffusing wave of a distant billow of smog, a vague tip had already spread across a legion of news media.

They only need to bug the Planetario Hotels with their reporters’ presence to be able to dig up something cogent about what they got a tip of.

All were in a race to beam their searchlight on what might probably be the most selling story of the entire World Cup news altogether.

Many of the reporters were lucky enough to push past the security operatives in the crowded reception that early hours of the day.

Some others who couldn’t wade through the resistance resorted to hanging around and lobbying, until they could find a pass in.

Kansi was lucky to push through the crowd of other reporters into the spacious reception lobby.

A dark, slim young dude of twenty-nine, he worked for a popular independent print and online newspaper in the country. The Megaphone.

Kansi smiled to himself as he pushed his way into the reception.

It was the reporter’s seventh year on his job. And he aimed at a long deserved promotion while he raced amid other journalists to cover the story.

He was grateful to be assigned this. The recently promoted Managing Chief at his workplace had chosen to give him the opportunity to prove himself.

Kansi’s boss had always believed in his ability and hard work. Unlike the previous manager who detested the young man for his straightforwardness.

It was just about 7 early that morning, and the crime incident had happened some minutes before midnight.

It had, in fact, occurred just a couple of hours after the grand opening match of the World Cup, being hosted by Quitalia.

Quitalia 2018 was the very first World Cup event that the humble North African country would be hosting.

And it’d taken the nation four full years to actively prepare for it.

But then, here was something grave that wouldn’t ever be let out of the executive Suite No. 701 of the Planetario Hotels – and into the high streets of Quitalia.

More especially when that something grave wasn’t unconnected to the ongoing World Cup.

The case was no minor one at all.

But never because the culprit was a serial killer. Or a member of a Mafia. Or something along those cliché lines.

For the charming twenty-year-old alleged culprit was none of those things.

But he was the golden boy of the opening match of the World Cup, held just the night before.

Yet the Quitalian footballer was the rarest kind of success that’d enjoyed a glorious worldwide spotlight since he was about seventeen years of age.

His golden name was Tai VeShadd.

VeShadd had made lasting records in the world of football. Only to break his own records with yet unbeatable ones.

Football to VeShadd was as though he was the inventor of that global sports. The charming boy even drove the game from his post like a crazily genius gamer.

It wasn’t a joke at all that the youngster was nicknamed ‘King of Football.’

And it wasn’t for nothing the dude was made the captain of Quitalia’s national team.

Yet Tai VeShadd was only a goalkeeper.

But VeShadd was that rare out-of-the-box type of keeper!

The twenty-year-old had a clean sheet record that spelt out the fact that he hadn’t ever conceded a penalty goal.

For it was the boy’s specialty that none of his valiant contemporaries ever got to master.

As for goals from the pitch, the young goal killer had a count of just six conceded goal in his entire football carrier.

The gorgeous, light complexioned, curly haired dude was the likeable, loveable sort after all.

For Tai VeShadd was a humble, adorable gentleman. In spite of his grand records and achievements in the world of sports.

He was a kid with a sense of responsibility and a record of integrity. And he was a devoted Christian, too.

VeShadd came under an international spotlight when he stretched his skill to nerve wrecking limits in a notable U-17 match he played for his country a couple of years ago.

And he wrought an astonishing, jaw dropping goal for his team as a keeper.

The mathematical goal which the athletic robot made was one strange, earth shattering goal kick – which unbelievably skidded from net to net.

The incredibly glorious feat got a long, terrific, exhilarating roar… and which made the entire stadium quake and quiver.

And so, like as of the speed of a lightning bolt, several international football clubs swept in to haggle over Quitalia’s golden boy.

It wasn’t too long that Tai VeShadd became a primary ambassador for the prestigious Teen Vogue. And then, for UNICEF, too. And also, the World Health Organisation (WHO).

It also wasn’t too long that the entire planet couldn’t help doodling over that Prince Charming on the football pitch.

And yet again, at the opening match of the 2018 Quitalia World Cup, VeShadd kindled a literal fire in the hearts of passionate fans with his signature goal.

At the 89th minute of the hopeless match that was to end with a 1:1 score, the miracle boy turned the games around within a second – with an absolute checkmate.

And it was VeShadd again: the king of football swept into action and made the rarest, out-of-the-world net to net goal kick…

The fast rolling ball skidded through the thin waves of upper air with such a wild, unstoppable spiral spin.

And it was only caught a moment too late… within the crushed opponent’s net.

It was a goal! A terrific goal.

The rest of the opening match was an unstoppable roar of excitement.

The goal was also the unbeatable feat that’d go on to earn VeShadd the awards of both the Best Goal of the Tournament as well as the Man of the Match, in the World Cup event.

But then, as of now – several hours after the victorious opening match – the so-called king of football had rather conceded a major goal in the game of life.

It was a mistake too many. A fault too much. And a lapse too early.

It was something that could destroy all that VeShadd ever stood for and all that he ever achieved.

If… just if, it became known to the public.

Yet, with the camera eyes of preying reporters, the beloved world class footballer and model ambassador could soon become the subject of a heated ugly news scandal.

And which could even raze down all things on its path.

Kansi dashed along the vast hotel lobby with the others. He held his notepad and a pen in one hand and pulled his cameraman with the other hand.

The twenty-nine-year-old investigative reporter managed to wade through the thickly packed crowd of other racing reporters.

As Kansi pushed through his stumbling blocks, with his cameraman in his firm grip, the young man raised his gaze.

And who he saw coming ahead was Tai VeShadd.

The national team’s captain and hero.

It was the very fibre of motivation the reporter needed to push behind the rest of his obstructions.

With all the force the desperate young man could muster, Kansi brushed his rivals aside in a gallant sweep of a hand.

He skidded forward with a giant slide and found himself stuck to a standing foot.

He was excited he reached first. He was thrilled he arrived.

He let out a deep breath. ‘Ah… my promotion is solved now!’

Kansi raised himself slowly to face his definite aid towards his desired promotion.

But, standing up, the young man’s gaze was faced squarely with a gladiator looking bouncer.

Kansi stepped back and looked around.

He could see a line of security operatives with hefty arms spread apart like the barricading Great Wall of China.

He looked back over his shoulders and saw that his rival reporters had halted in their steps – including his own cameraman.

The young man shot his gaze past the great wall of men in front of him and saw the football superstar having his arms folded across his chest.

For behind the king of football stood the powerful world organisations like a huge and mighty rock. 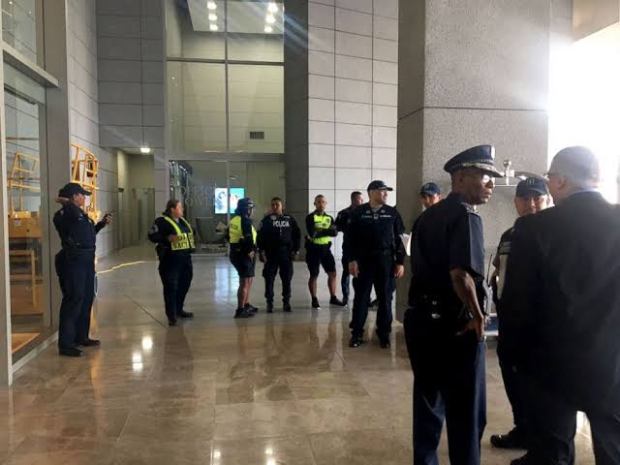 And they would shield VeShadd and cover up his crime.

Up to the very end of the world.

One thought on “#PENALTY WebNovel: Chapter 1”