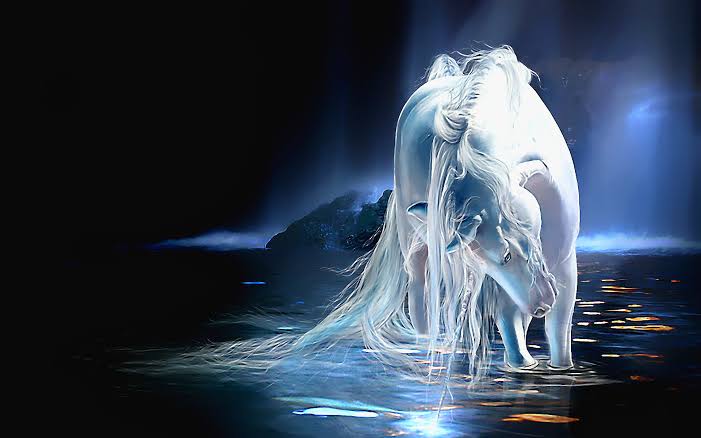 LIKE as of the break of sunlight at cockcrow, Iyun slowly parted her eyes open to see the living world again.

The young beauty had just escaped the open jaws of the grave.

Iyun opened her eyes and she could see staring faces hovering over her, where she laid on the ground by the Kojala pond.

Her blurry first sight soon gave way to a clearer perspective. The young woman could now make sense of the anxious faces glaring at her.

The faces were those of the people of Koje, her own people.

And the concerned expressions in them suddenly turned into a rapturous gleam when Iyun came up awake.

But Iyun somehow felt she was rescued from the water by a certain noble horseman that she really couldn’t find among the crowd.

And she was almost certain it was that glorious someone who came to her rescue. And not the standing crowd who brought her out of the water.

When Iyun almost drowned a while ago – and when she was just about to black out in the pool, she suddenly saw a marvelous sight. Out of nowhere.

Iyun saw from beneath the water a particular glorious someone ride up to the bank of pool on a regal white horse.

She saw the noble horseman jumped down from the horse right then and plunged into the pool straightaway.

Iyun was at the brink of choking beneath the water when she felt the young man lift something that felt like a mass of stone or boulder off her nostrils.

And then, she felt her body being borne up from what suddenly felt like a receding water level… and carried onto a plain ground by the bank of the pond.

It was the crowd of onlookers who carried Iyun up from the large pond… as the water volume suddenly started to reduce.

Iyun opened her eyes and sneezed a couple of times. And the crowd’s lingering concern suddenly dissolved into a rapturous beam.

The entire Kojala pond was overcome with a shout of ecstasy. For Koje inhabitants were super excited that they strove to snatch their daughter out of death’s cold grip.

But when Iyun was made to sit, her eyes only wandered through the entire open space… as though it was searching for someone else.

A certain brazen man spoke up, with some sternness in his frosty voice.

‘You’ve seen the depths of the pond of death, young girl. What more do you look for?’

Iyun wanted to answer and say there was really someone she couldn’t find. But she only kept on sneezing for a bit.

She took a breath and tried talking again, restlessly glancing around as she spoke.

She held a finger into space, pointing it aimlessly around.

She stammered through her words. ‘Just now… just when I was dying… I saw a man come down from a big, white horse. He plunged into the water and… and saved my life!’

The people couldn’t take Iyun serious at this rate. She seemed to be spewing some ungrateful nonsense. Even to her rescuers here whom she owed much thanks already.

‘What are you talking about, daughter?’ an elderly woman interposed in a quiet voice. ‘You didn’t see a horseman, huh. We were the ones who rescued you from the water.’

An elderly man took over.

‘Who would ever ride a horse in Koje? Riding a horse to us is like riding your kindred, you know! Here we share the strength of a horse ourselves. So, you saw no horseman, little girl!’

And then, a young woman asked Iyun to describe the horseman she was insisting she saw when she was dying. So that she can pinpoint her madness.

And Iyun’s description painted out some unearthly aura and glory that accompanied the strange horseman, together with his wool-white horse.

For it felt like an indescribable transcendental experience. And that glorious presence, too… it felt particularly out of this world.

The earlier young woman couldn’t help but yell out a mockery.

‘The High Heavens must’ve come bowing down to kiss earth… I mean Koje’s earth and soil!’ she mocked.

The crowd joined in the mockery and ridicule.

Iyun couldn’t grasp what just happened. She found no word or scenario to capture it.

Maybe it was what the people of Jaiye call dream, she thought.

Iyun had heard little children talk about dreams they had in their sleep, on a few times she went to Jaiye city to work as servant girl. But, interestingly, she’d never understood what it meant to dream.

The entirety of Koje people didn’t ever dream; not even for once. As they’d been placed since ages under an everlasting spell… called the Animal Curse.

Animals do not dream, the curse maintained: therefore, Koje would not know even the paradise of dreams.

So then, Iyun wouldn’t even know if what she saw was better called a dream. Or if at all it was something infinitely beyond the shores of Dreamland.

The young woman had earlier asked around Koje about the idea of dreams after she was dismissed from a housekeeping work in Jaiye. It was when she was much younger.

But then, the responses she got from Koje elders hadn’t sufficiently satisfied the young girl.

‘Dreams are only meant for the lazy,’ some answered. ‘Lazy people who’d rather be active in the world of the dead when they sleep.’

‘We don’t have dreams here in Koje,’ some others responded. ‘The land forbids that we have dreams in our sleep. Horses don’t dream!’

But then again, Iyun’s curiosity about the mysterious dream world had only just resurfaced… in the deep recesses of her questioning mind.

She’d added another puzzle to an unclear premonition that woke her up from bed that early morning.

She’d just added what she saw when she came close to the shores of death.

Iyun pondered the thoughts in her searching mind.

What if the High Heavens really came bowing down to kiss earth… Koje’s earth for that matter?

And no, Iyun wasn’t going to stop here.

Not until she met the only man who could answer.

One thought on “SACRIPRICE WebNovel: Chapter 9”